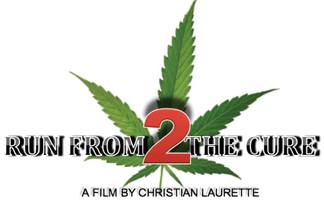 Project Summary:
Hi. My name is Christian Laurette. I am the Producer/Director of RUN FROM THE CURE: The Rick Simpson Story (shown below), the FREE Internet documentary that shows you how to rid your body of diseases and illnesses such as cancers and many many others, while avoiding the dangers of cancer-causing treatments like chemotherapy and radiations... using only ingested, vaporized, and/or topical applications of cannabis oil medicine.

The campaign to raise this funding is crucial to my producing the film to its full potential, complete with science gurus and healed patients... we'll explore how cannabis kills cancers and restores normal body functions from diseased states of being, and we'll look at why our world governments and cancer societies have ignored their own research in favor of eliminating the most medicinal plant on earth from medicine.

The implications of such a healing plant reach all the way around the world. The list of healing applications of cannabis oil for disease seems to grow by the day. Please help me plant a seed that will grow forever on the World Wide Web. Help me to help the next mother, father, sister, brother, son, daughter, grandchild, nephew, aunt, uncle, coworker, friend... to live on and tell their true stories of survival using this miracle plant extract.

I have various exciting PERKS! available for anyone who donates (courtesy of the awesome Janet Sweeney of Phoenix Tears...thanks Janet!) Be sure to check out what your donation gets you (other than that "warm feeling" that comes from doing something great for the world.) Shipped incentive PERKS! can only be sent within the US.

If the full funding amount requested cannot be raised the funds that are collected will be used to produce the film in any regard. RUN FROM THE CURE 2 will be produced. Your donation will allow me to give the production the momentum it needs to reach those who need it most and to include key players in this movement. I am not trying to make it "Hollywood", I just want to make it television-ready in case we can get it picked up for air on TV. I have heard from people in Europe and the US who have reported seeing RUN FROM THE CURE on television. With a small production budget I believe I can make this documentary television-worthy.


The Impact:
It is estimated that RUN FROM THE CURE: The Rick Simpson Story - A Film by Christian Laurette has been viewed by several million people to date and continues to be viewed in the millions as the word spreads of the truth about the healing power of cannabis oil medicine, which has allowed literally thousands of people to heal themselves and/or continue to live their lives using medicine made with a plant after in many cases being turned away by the current medical establishment.

The HIGHLY anticipated follow-up film to the independent documentary RUN FROM THE CURE.


Other Ways You Can Help:
Some people just can’t contribute, but that doesn't mean that YOU can’t help in other ways!

Help me get the word out and make some noise about this campaign and about cannabis medicine. My first documentary RUN FROM THE CURE is 100% free to copy and give to other people for FREE. It is always free to watch online at any time. Please give in any way you can to help this worthwhile endeavor become a reality one more time! A chance to be part of cannabis history! A chance to make a difference that matters!

Please remember to use the Indiegogo share tools! Along with your donation, I can defy the system once again to ignore this all-important information while educating the masses one more time.


Best of health and happiness to you all. Thank you for your generous support. - Christian Laurette

Fundraiser for RUN FROM THE CURE 2 is endorsed by Rick Simpson and Phoenix Tears.
Additional promotion and fundraising for the film may be required at a later date.
I do not sell, nor do I produce cannabis oil. I am a documentary film producer with a unique opportunity to educate the world about cannabis medicine.
Special thanks "2" my Executive Producers, Janet Sweeney, and Timothy Tipton for all their hard work and dedication "2" the project.