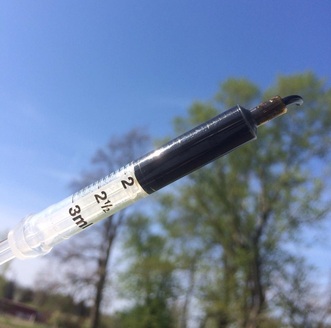 Cannabis Oil
All MRI reports remained stable until November 2013 when my quarterly MRI came back showing regrowth of the tumor. My brain surgeon in Los Angeles recommended 4-6 months of chemotherapy, and if that didn't work, another brain surgery to go in and clean up the regrowth would be considered. He also gave me anti-seizure medication for auras that had started to manifest as strong unexplainable odors. My doctor described this experience as an olfactory seizure. While researching Charlotte’s Web cannabis oil as an alternative to the prescribed seizure medicine I also found out that cannabis oil was also showing promise as a cancer treatment and could be an alternative to chemotherapy. I was living in a state that did not have legal access to cannabis but my youngest daughter, Jillian, was living in San Francisco where medical marijuana was legal.

When Jillian came home for Christmas she and my husband, Rick, decided it was time for me to make a decision to do something. I wasn't ready to decide anything just yet. I wanted to have Christmas with my family. The day after Christmas I made up my mind to drive out to California to investigate cannabis oil as a treatment. My husband took an emergency leave of absence from his job. We then put away the Christmas tree ornaments, cleaned the house, loaded up the car, and headed to California. We talked with doctors, met with support groups taking the oil, read articles about successful brain tumor results in Spain and Amsterdam and gathered information wherever we could. We decided to give the cannabis oil a try, especially after we read a paper on a study about the chemotherapy my doctor had recommended. That study suggested patients with tumors like mine appeared to get better at first with the chemo but then the left over tumor cells would mutate and turn aggressive over time.

After many conversations with my husband we decided to commit to a 90-day cannabis treatment protocol. My San Francisco neuro oncologist felt like my situation was not a dire emergency and felt like I could be allowed the 90 days to try this unorthodox treatment, however if that didn't work, another surgery would be likely. After we had chosen this path incredible healers came forward to help support me through this unknown territory. These healers included one of the best neurological teams in the world. I know I have been incredibly fortunate. I am so very grateful to each person who came forward with his or her special expertise and other gifts to make this treatment possible for me.

After establishing residency in San Francisco, I was able to get a medical marijuana card. The card was for cancer treatment but, amazingly, the cannabis oil has helped me with my fibromyalgia pain, joint pain, and chronic headaches. I had this pain for many years and it was getting worse. I literally have no pain now. My blood pressure had been creeping up over the years and was consistently pre-hypertensive, now it’s consistently on the low side of normal. I have not taken any other medication except the cannabis oil, supplements, and good clean healthy food over the last 8 months.

When we arrived in San Francisco, my husband, Rick, became my Angel from Heaven. He took on my full time care, and I made him my legal caregiver so he could pick up my medicine at the dispensary if I was not able. He bought a good juicer and began juicing all organic non-GMO veggies every day. He prepared almost all of my organic gluten free meals and took me out for a walk and fresh air daily. Our temporary home was across the street from the Golden Gate Park so we walked through the park down to the beach daily during my treatment. I began calling the park Grandmother GG, because I felt so nurtured in her abundance, and this daily ritual in the beauty of nature was, I believe, a major contributor to my healing. We got a machine to create pure alkaline drinking water. I had an arsenal of cancer fighting supplements, foods, and daily practices to work on my physical, spiritual and emotional health.

The plan was to do the Rick Simpson cancer treatment protocol of 60 grams of highly concentrated cannabis oil over a 90 day period, the higher the THC the better for killing tumors. My 90 day MRI was scheduled for April. I had not reached a gram a day by that time and was concerned that the MRI results wouldn't be what we were hoping for. Indeed the report showed no change in the main tumor’s regrowth; however, there was a smaller inoperable tumor, in the cingular gyrus that we had been monitoring since my first tumor surgery ten years prior that was completely gone. We were amazed and it gave us the encouragement we needed to continue the cannabis protocol. To get to the amount of a gram of oil a day took months of building up my tolerance. I had very physical challenges and setbacks during this process such as seizures, middle of the night walks, tremors, convulsions, nausea, frustration, lack of appetite, and many tears. I finally reached a gram a day and eventually up to two grams a day on the final two weeks before my second MRI at the end of August.


In August, eight months after beginning the cannabis treatment, my MRI was reviewed by a leading Radiologist, my Neuro Oncologist, and my world renowned Brain Surgeon, and it was concluded that all that was remaining of the tumor regrowth was scar tissue. I will have another MRI in December. Because these tumors are chronic and tend to grow back, I will always be living MRI to MRI, but the key word here is that I am living …and in great health with a great immune system. I was not left with my immune system compromised by chemo and radiation, which is the standard protocol for these types of tumors as well as other cancers.

By eating healthy food and walking every day we both lost a needed 35 lbs. I never experienced the dreaded “munchies” that some get on this medicine.Smoking marijuana is reported to have an appetite stimulating effect. I wasn't smoking it but was ingesting it in a capsule, so it had a much different effect for me. When I built up a tolerance to the THC, even though I was ingesting large amounts, I did not get an intense “high” like what would happen if a person were smoking it. For me, it produced a deep sense of well being. I have read other peoples testimonies on their experiences of ingesting large amounts of cannabis oil. Most people just fall sleep. I felt more restless and needed to walk. 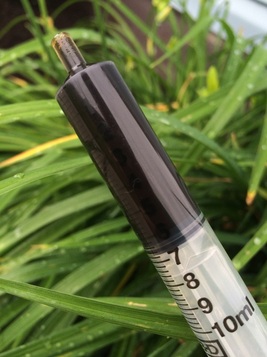 Cannabis Oil
Since concentrated cannabis oil with a high THC content is necessary to kill tumor cells it concerns me that the main talk in several states is to legalize CBD oil only. That is great news for seizures patients but denies treatment options for cancer patients, plus THC has so many other health benefits that shouldn’t be ignored.

Below is a list of other modalities I was using for healing:

Supplements are medicine too.
Supplements that I have found to support me in the fight against brain cancer were green tea, coconut oil, vitamin D3, CoQ10, selenium, omega 3, garlic, cannabis oil, turmeric with black pepper, B vitamins, certain types of mushrooms, olena, apricot kernels, black seed oil, and boswellia, to name just a few of the supplements I was taking.

Other Healing Modalities.
In my opinion, having a positive attitude, a heart filled with gratitude, prayer/meditation, and yoga/exercise were are all essential parts to my healing process. I also worked on releasing bound up emotional density which can eventually manifest into dis-ease. I also walked at least 3 miles almost every day.

Wrapped in Universal love, all of the above, along with prayers, love, support, good intentions, good wishes, and all around good vibes, has made all the difference in the world. The support I have received from my family and friends has been nothing short of amazing! Everyone has been totally and openly onboard and generous with their on-going support which means so much to me.

The evidence is rapidly stacking up on the healing properties of the Marijuana plant. I’m excited for the future of Medical Marijuana and I feel a strong responsibility to spread this information. I hear so many misconceptions about this amazing medicinal plant that I feel a need to tell my story to anyone who is interested and my prayer is that it will be received with an open mind and a compassionate heart.

Many Blessings to All